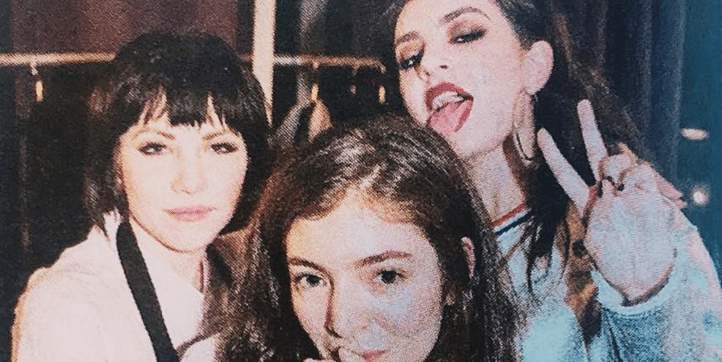 Articles
Noisey: What If Lorde Were Best Friends with Carly Rae Jepsen Instead of Taylor Swift?
15.12.2020023
I’m lovin’ how the media is continuing to run with this story. It gives me hope: Earlier this week, former teen (she’s 20 now!!) pop music idol Lorde tweeted

Articles
Ariel Pink Details Working with Carly Rae Jepsen In New Interview
10.10.2020012
From Wearetheguard.com: You co-wrote a song, “Trouble In The Streets,” for the band BC Unidos, a post-punk project of Patrick Berger, the producer behind

Articles
The Weekly Interview: Carly Rae Jepsen
23.09.202004
From LasVegasWeekly.com : On opening for Katy Perry: I had no idea I’d get to do this, but I’m more than thrilled. I’ve known Katy throughout the years

Articles
Carly Rae Jepsen to Appear at iHeartRadio’s MMVAs!
22.08.202001
Good news for fans who have been wondering whether or not Carly will show up at the MMVA’s this year. Well now we have confirmation that Carly will be

Articles
HuffPost: Carly Rae Jepsen Doesn’t Care If She Has The Song Of The Summer
14.04.202001
Another exclusive interview, this time from Huffington Post. Here’s a snippet: What do you make of “Cut To The Feeling” being hailed as the song of the summer?

Articles
Spin: “Charli XCX’s Carly Rae Jepsen Collaboration Could Use a Bit More Carly”
07.04.202001
Spin.com posted up an interesting critique of the song “Backseat”: Heartsick uncertainties are stock in trade for Jepsen, who’s a friend of PC Music herself.

Articles
Carly and Kimbra Instagram Stories Fuel Collaboration Rumors
05.02.202008
It all started with a simple little teaser photo over the weekend showing the two together with Jack Antonoff. But then recent Instagram story posts from

Articles
MTV: “Carly Rae Jepsen – Queen of Summertime”
14.01.202001
MTV.com has an interesting write-up on Carly that is chock-full of Simpsons references.  Here’s an excerpt: There’s a moment in The Simpsons when Martin

News
Got Scammed Trading Crypto
Some news to my fans. I was recently introduced to
0 110
Carly Rae Jepsen Delivers Powerful Version Of ‘O, Canada’ At NHL All-Star Game
Carly recently surprised us with a new blonde look
0 5
Instagram Story: Another Hiking Adventure
From David Kalani’s Instagram: Carly and friends go
0
New BMI Song Entry: “I Love You”
This marks Carly’s 4th registered entry on BMI/ASCAP
0 7
Picture of The Week #2
Photoshoot by Hazel & Pine Share this: Tweet
0 7
Cut to the Feeling Gets added to BBC Radio 1 (UK)!
There have been questions on whether or not “Cut to
0
2 New Songs Pop Up on ASCAP Titled “For Sure” & “The Tide is High” (Actually, make that 3!)
It looks as though Carly’s new album is starting to
0 19